Tether CTO Paolo Ardoino has been involved in controversy in recent days that has flared up with the collapse of the UST. The dose of the discussion in the live broadcast also increased. Tether, the stablecoin that has attracted the most attention by crypto investors, witnessed a $ 10 billion exit with the UST collapse this month.

In a heated Twitter Spaces conversation with former billion-dollar hedge fund manager and Peter Lynch assistant George Noble, Ardoino was questioned about Tether’s refusal to disclose an investment program. During the 10-minute talk, Noble asked Ardoino why he seemed uninterested in silencing critics by issuing a full disclosure of Tether’s assets, emphasizing that routine disclosures are standard across all other industries. 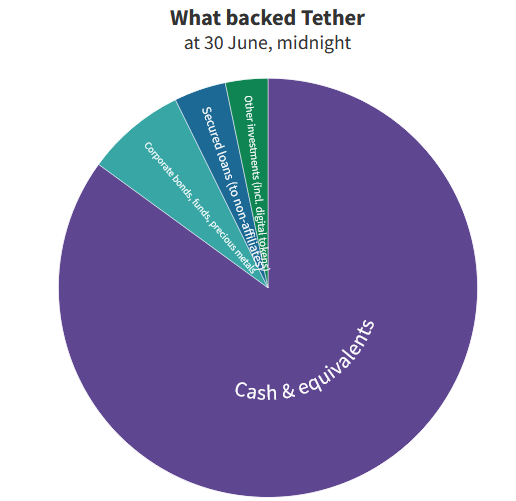 He says that the majority of Tether reserves are in assets that can be easily converted into cash.

The conversation became more and more heated and turned into a discussion. Noble put serious pressure on Ardoino as to why Tether never issued an audit or named the names of Tether’s assets.

“If you look at court documents, it’s a proven fact that Tether has lied in the past… The easiest way to drive away critics is to do what any company in any other industry would do”.

Ardoino , the company’s CTO , said that they are working to reveal more details, but has not yet shared the requested information regarding the reserves they support USDT . Ardoino accused Noble of losing his cool and also asked why Tether should silence its critics. He claimed that customers are perfectly happy using Tether.

In a thread of tweets, Noble compared Tether’s growth to that of Enron before the 2001 crash. Like Noble, Tether, Enron’s senior staff have consistently refused to respond to requests for balance sheets or cash flow statements from the public.

Over $10 billion in Tether has been redeemed this month. And investors turned to alternatives like USDC or BUSD to avoid losing all their money in a crash similar to Terra UST . Of course, all this does not mean that Tether is insecure, but the negative developments in the past have caused many crypto investors to trust the company less.

Tether publishes periodic “snapshots” of its assets, which it calls “Tether Assurance Consolidated Reserve Reports.” These instant confirmations are not a complete audit. Traditional money market funds provide complete financial disclosures along with their Uniform Committee on Securities Identification Procedures (CUSIP) numbers. For example, the American Bankers Association and Standard and Poor’s Global Market Intelligence publish CUSIP numbers through CUSIP Global Services. CUSIP numbers provide precise information about the issuer and type of each financial instrument. So people who invest in a company can be sure that the assets on the balance sheet are really there.

“We should roll out stablecoin regulation by the end of the year,” US Treasury Secretary Yellen touched on at the beginning of the month. What US regulators want is for stablecoin issuing companies like Tether to be subject to bank-like controls.

Tether had previously published a confirmation of its holdings. A verification by Friedman LLP found that Tether had $382,064,782 in a bank account on September 15, 2017.

However, Noble accused Tether of transferring funds to an account before receiving this certification and moving the money back after certification. The New York Attorney General’s investigation into Tether and Bitfinex has indeed confirmed that Bitfinex transferred $382 million into his bank account just hours before Friedman LLP was certified.

Tether has repeatedly promised to perform an audit, but has repeatedly failed to perform an audit. Friedman LLP would fully oversee Tether’s finances in 2018. However, the two companies abruptly parted ways when Tether proved unwilling to reveal all the details about its financial situation. Tether and Bitfinex have previously lied about things like their close relationship. Bitfinex’s Phil Potter later admitted that Bitfinex actually owns a stake in Tether. Although common knowledge today, Tether has kept this secret closely for years. Bitfinex’s transfer of funds to Tether’s bank account prior to Friedman LLP’s approval showed both companies’ willingness to protect each other.