According to reports revealed on Thursday, $ 4.6 million worth of Fliecoin (FIL) tokens have been deposited into Binance more than once. However, in the explanations made later, it was stated that this was due to the misuse of APIs.

In fact, the problem was similar to “double sepnding”, a flaw that allowed the same cryptocurrency to be spent twice, often caused by an attack on a blockchain and disrupting the system.

The proof-of-work mechanism that supports Bitcoin and other cryptocurrencies is designed to prevent double spending. However, the transaction occurred only once on the Filecoin blockchain, even though the exchange had mistakenly accepted the transaction twice. So it was more like “depositing money in multiple ways” than double spending.

A blog post shared by Protocol Labs, the team behind Filecoin, says the research found no problems with the Filecoin network or RPC API code. “We are confident that there are no double spending on the blockchain itself , ” a Protocol Labs spokesperson told Decrypt . He used his words. 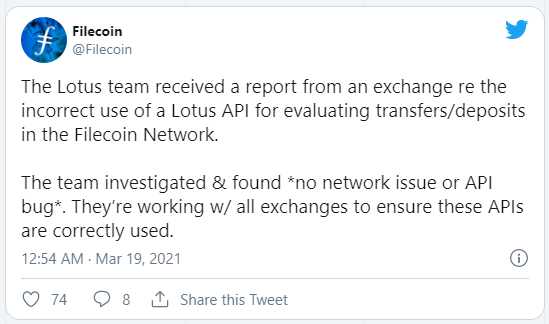 Binance, on the other hand, stated in its statements that the FIL deposits, which are Filecoin ‘s token, were stopped yesterday after the double deposit. “The problem was due to the misuse of the Lotus (Filecoin’s software package) API logic and its integration into the Filecoin Network transfer and deposit,” a spokesperson said. Short for application programming interface, API can be described as a way for software to communicate with other software.

In addition, there was no loss of funds, according to the Binance spokesperson.

How Much Bitcoin (BTC) Has Elon Musk Has?