Does Near Protocol (NEAR) Have a Future? What is NEAR Coin?

The number of Ethereum rival layer1 blockchains is quite large, and many of them have brought serious gains to the early-stage investor. So why is NEAR different? We consider the strengths of the alternatives and evaluate whether it will be a real competitor for Ethereum. Unlike traditional price prediction reviews, we’re going to cover extensive data here.

ANOTHER layer1 project that promises to be faster, cheaper, and more secure than Ethereum is NEAR. This is the common claim of all Ethereum alternative projects, so what makes NEAR Protocol different?

Ethereum wants to implement this in 2023. However , NEAR Coin currently has this feature. Fragmentation divides data into several parts. They can then process the data in parallel with each other.

Dynamic means it can adjust the size of shards to demand, keeping fees low. Near has unlimited scaling potential thanks to its sharding technology. TPS power is around 100k, which is a really great figure. Let’s take an example, we’re talking about something beyond Visa’s processing power per second.

With Private shards, it can create private shards to keep data more secure. Thanks to the Doom Slug feature, transactions are completed within seconds.

Two names stand out first, @AlexSkidanov – Former MSFT developer and director of engineering at MEMSQL. The second is @ilblackdragon, a former Google engineer. Team members have won international programming competitions. So they have one of the most qualified teams in the cryptocurrency ecosystem. 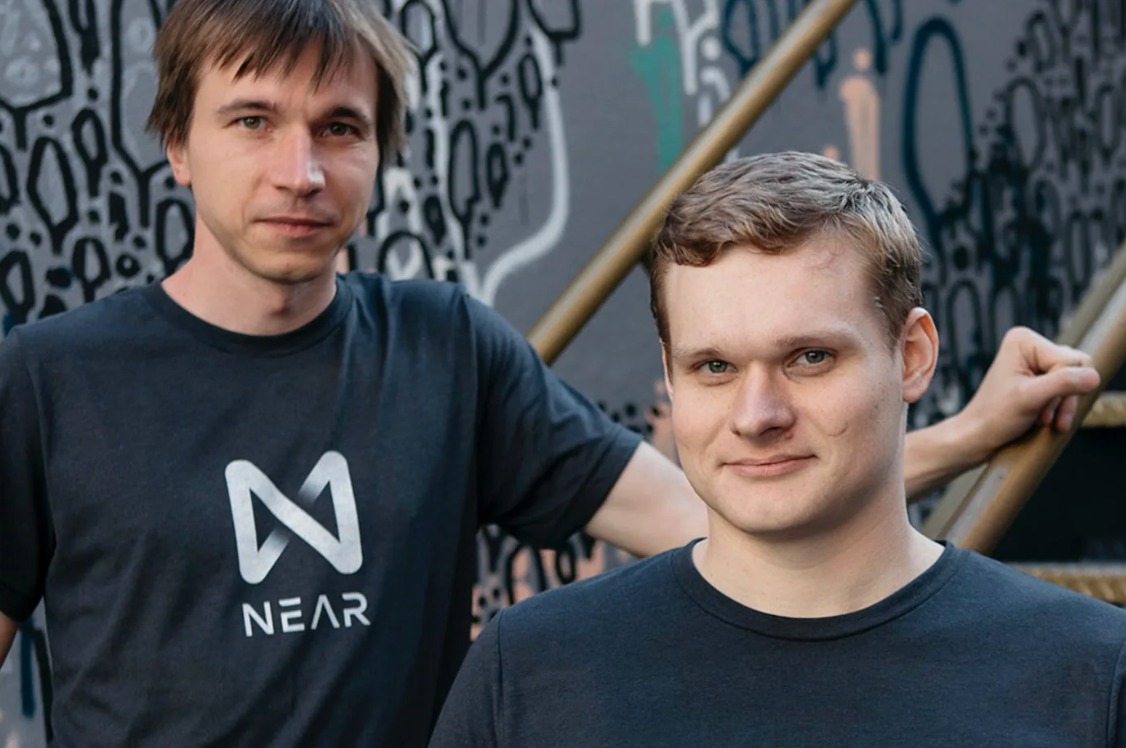 They have raised over $533 million in financing from almost every A-list Venture Capital. The $800 million Development Ecosystem Fund, money of course matters. One of the most important things needed to attract developers to the NEAR ecosystem is strong financial support. Thanks to the funds, developers come in, top developers develop great blockchain applications, network usage increases and NEAR continues to grow.

We mentioned that where the money is, developers can easily come. But alone is not enough. Cardano, for example, is having trouble attracting qualified developers to the network due to the difficulties of the Haskell language. However, NEAR offers the possibility to develop in common languages ​​such as Rust or Assembly . 30% of transaction fees go to developers. Huge educational resources have been created to assist developers located near Near.

These enable both developers and users to migrate to the NEAR Protocol .

TVL is rising and metrics are showing more adoption. This is extremely important to increase TVL strength in a bearish environment. Most of the dapps are on Aurora due to EVM compatibility the apps are easy to copy and migrate. The most important projects in the NEAR network are:

Aurora is an Ethereum Layer 2 built on NEAR. Developers can delegate ETH projects to Aurora. Leverages the power of Near (sharding, speed, low costs) Transaction costs < $0.02 Aurora has a TVL of $1.15 billion. 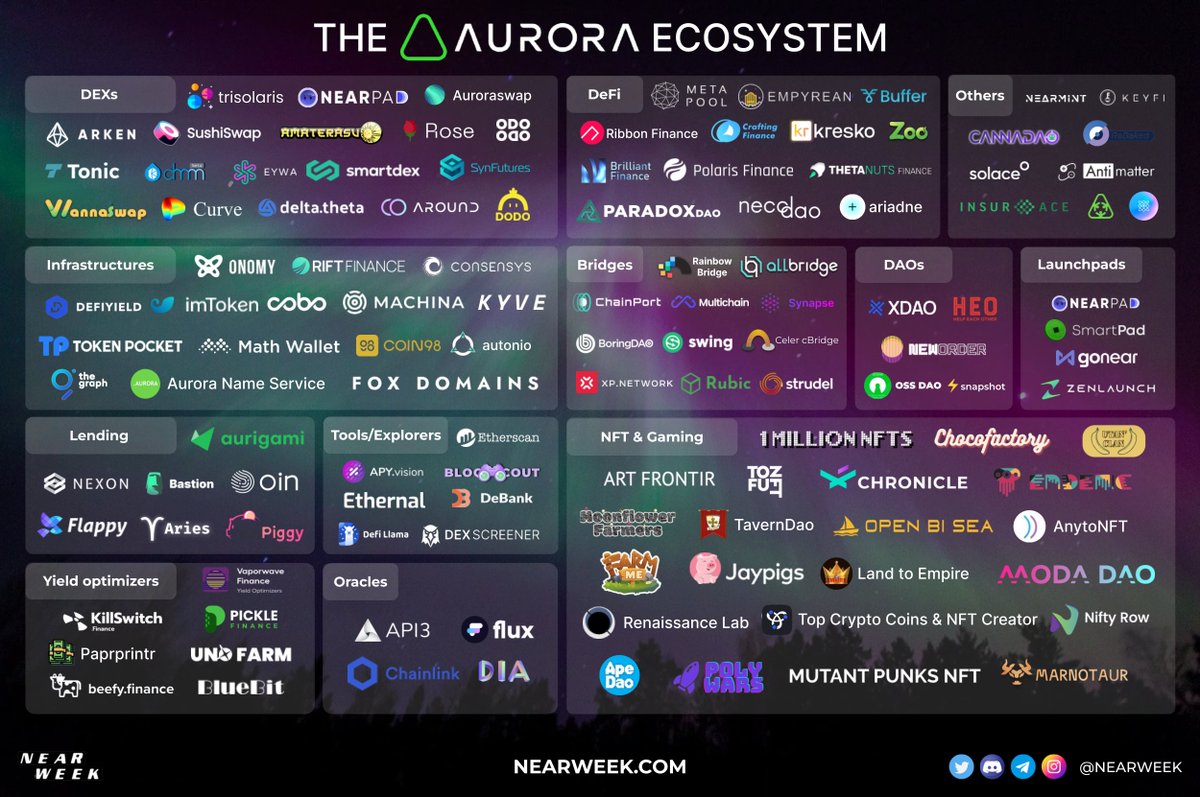 It is a reliable bridge between Nea and Ethereum. You can easily move your Ethereum tokens to Near. The bridging process takes about 10 minutes and updates you in real time. 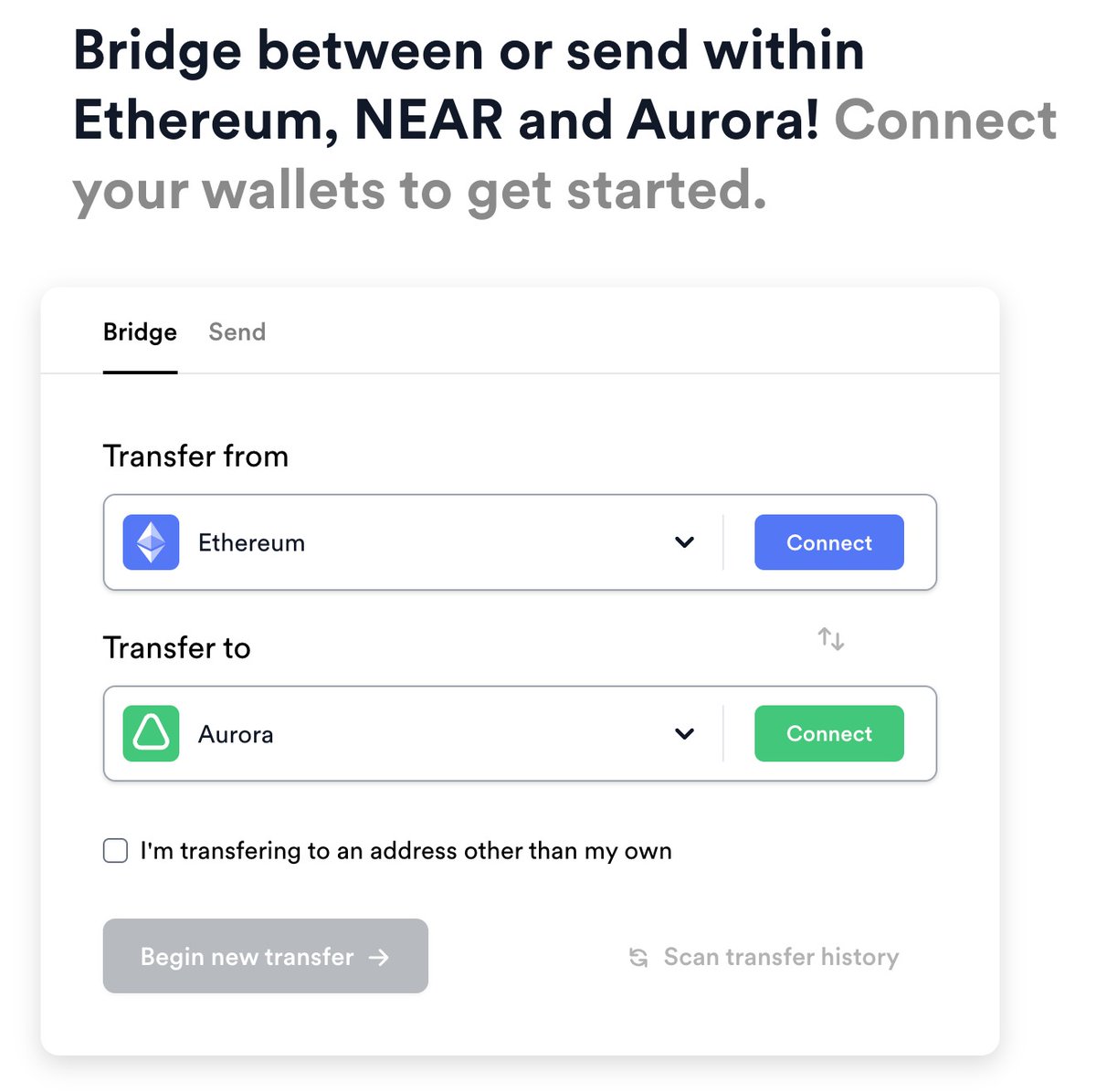 Allows developers to initiate application chains. Application chains are blockchains used for specific applications. It allows more customization compared to traditional dApps. Parachains in dot are expensive. Potentially millions of dollars. Octopus fills a gap in the market for more modest app chains. Up to 100 times cheaper than Polkadot parachains and low-layer blockchains can be deployed easily.

It is the main AMM of the NEAR network. There are some nice farming options here. Ref-wNEAR issues multiple tokens. So you are creating NEAR’s mini index fund. Stablcoin APRs are solid. Ref is working on Aurora multi-chain liquidity. With so many grants on the way in the Near ecosystem, the Near foundation is expected to provide more support to Ref. 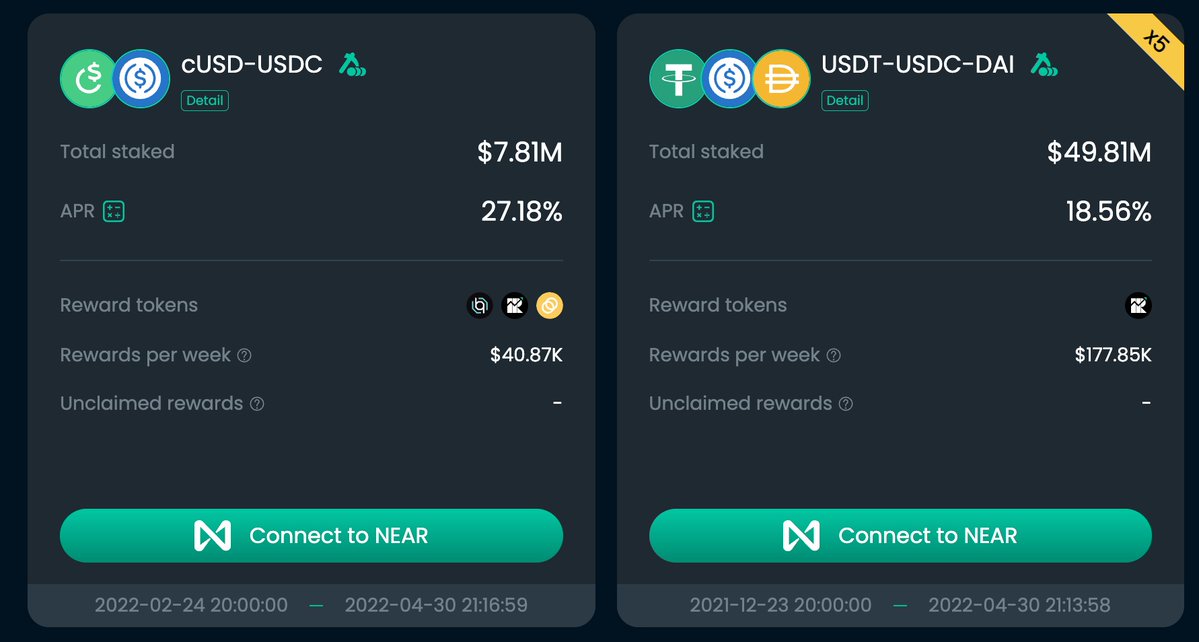 It is NEAR’s lending and borrowing protocol. Think of it like NEAR’s Aave. Over $400 million was invested. They use Near’s @anchor_protocol for their $USN stablecoins. 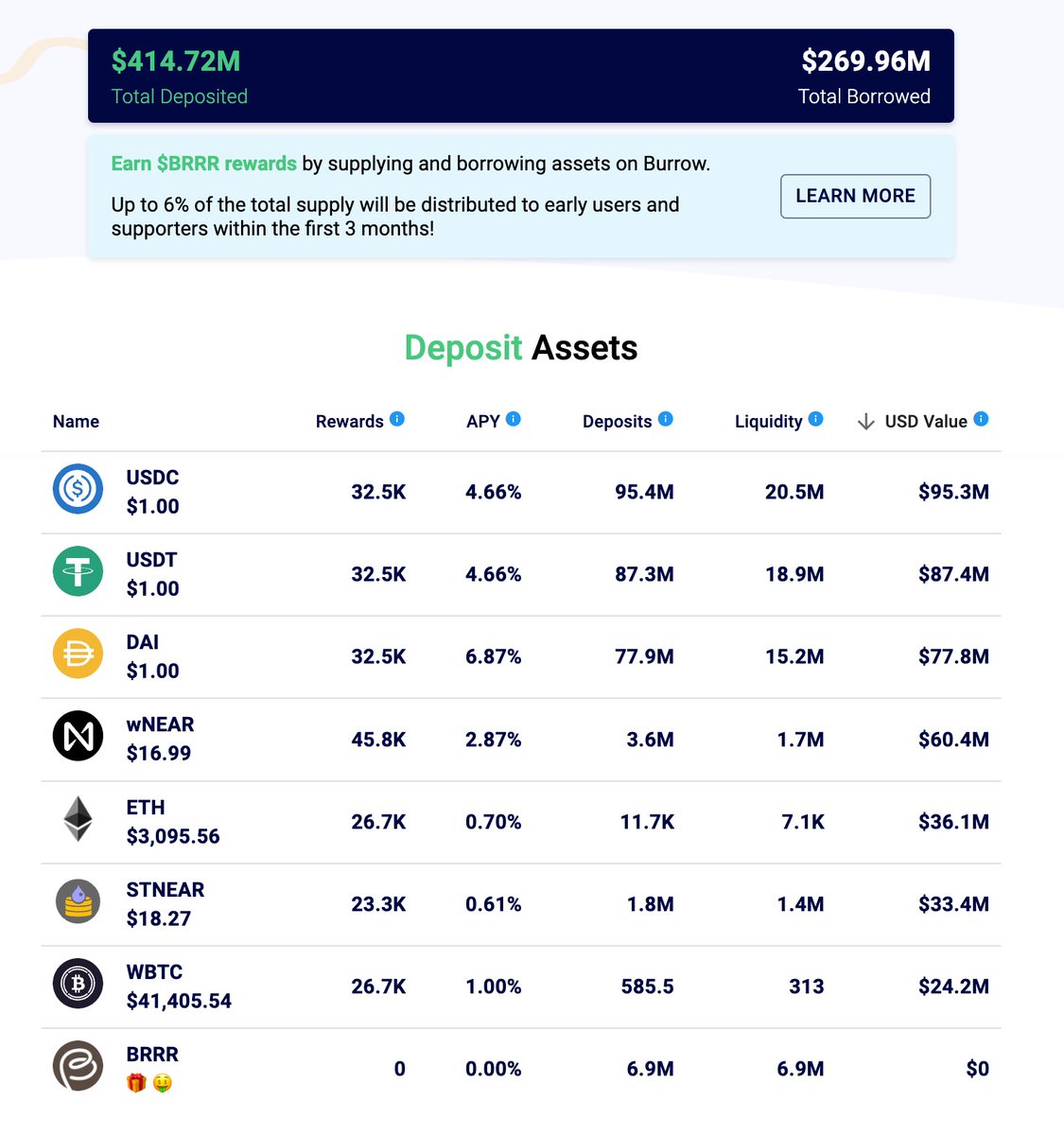 It is the liquid staking protocol of the Near protocol. We can think of it as a counterpart to Ethereum’s LidoFinance project.

Does Near Protocol (NEAR) Have a Future?

Recently, NEAR has been attracting a lot of attention from the cryptocurrency community. There is a tremendous amount of potential in the ecosystem and people are realizing it. People think Near will launch an algorithmically-backed stablecoin called $USN. Whatever Terra (Luna)’s UST Coin is, this will be the USN for NEAR Protocol . 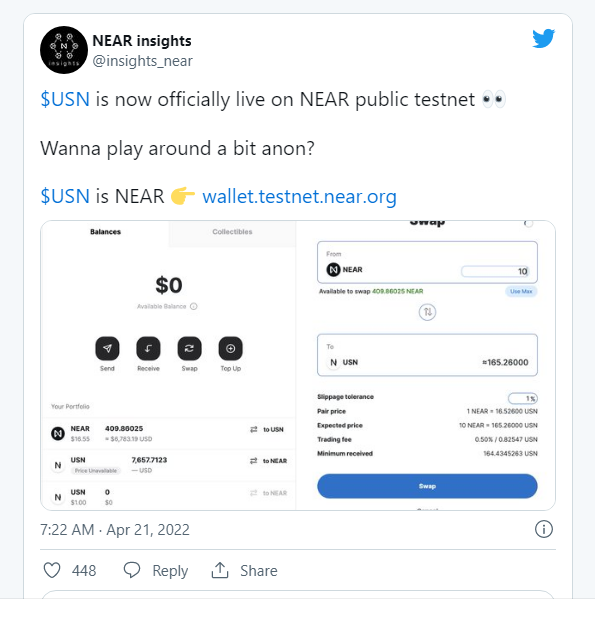 UST demand will increase thanks to 19.5% APY from Anchor Protocol. Anchor Protocol may drop rates soon, but 10+ APY for the stablecoin will continue to attract interest. But what if Near could offer ~20% APR or more? Of course they’re going to get a lot of hype and volume in this scenario. Near has 10% stake APR, but where will the rest come from?

Anchor has replenished its reserves several times by the LFG. Terra’s focus is to popularize its stablecoin in the real world. If NEAR follows the same path and can offer a 20%+ rate, it will make a serious contribution to its ecosystem, even if it assumes the burden of it for a while. Thus, let us conclude the first part of the article. Part two will be here soon.

In the light of all this information, it is up to the investors to decide on the future of NEAR Procotol ( NEAR ). Cryptocurrency markets have high volatility and you cannot make money from any project all the time. In fact, every project has the potential to cause permanent serious losses to its investor. Thanks to The DeFi Edge for compiling this information.

Popular Meme Coin Has Become The Focus Of The Market Again With These Developments!