Earlier today, the fifth largest crypto XRP managed to hit the $ 0.30 level, but later retracted. Now he is trying to heal at 0.30 limits. So why is XRP soaring?

According to CoinMarketCap, XRP, which was in trouble earlier today, managed to surpass the $ 0.30 level. The cryptocurrency has gained 9% in the last 24 hours. 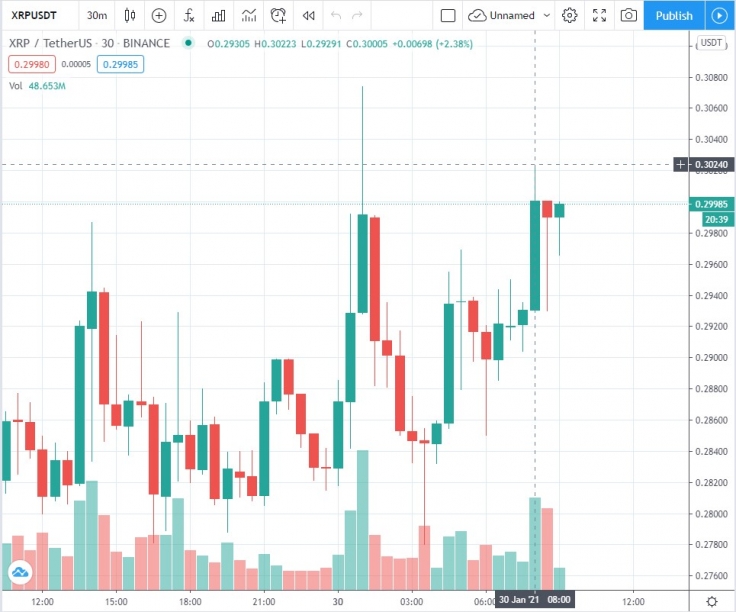 XRP was trading at 0.302 at the time of writing, according to CMC data. Here are the possible reasons for this rise:

On January 29, Ripple officially responded to the US security regulator who initiated legal action against him on December 21, 2020 . Ripple’s general council, Stuart Alderoty, made the news in Ripple’s latest blog post and summarized what happened for the audience.

He reminded the SEC that XRP is not a security, but a virtual currency (despite the regulator’s claim that XRP is an unregistered security) and therefore the SEC is not in a position to deal with it. Ripple has never had an ICO, and owning XRP does not mean that its owners are entitled to receive any portion of Ripple’s income and profits. In the defense, other claims of the SEC against XRP and Ripple were also discussed.

Prominent analyst Luke Martin believes that when Dogecoin (DOGE) went down after a tremendous uptrend yesterday, funds started flowing from this meme coin to XRP.

Yesterday, DOGE managed to top the top 10 on CoinMarketCap twice, but then bounced back twice. At the time of writing, DOGE was ranked 13th on CoinMarketCap . DOGE was pumped by the r / WallStreetBets team that bought shares of GME and AMA, and the price soared significantly.

The rise of altcoins is often powered by the spike in the price of the leading cryptocurrency Bitcoin (BTC) . On Friday, BTC; Tesla CEO and one of the richest men in the world, Elon Musk ‘s Twitter bio rose from $ 32,250 to $ 38,092 about six hours after tagging Bitcoin in his biography.

The community and the market thought that Musk eventually surrendered to Bitcoin and adopted it. Musk’s tweet, which many believe was about Bitcoin, was saved on the Bitcoin blockchain . After this huge rise, Bitcoin has returned to the $ 34,000 level so far.

Shiba Inu (SHIB) Price Analysis: What Is The Goal Of The Popular Cryptocurrency?

Ambitious Dogecoin Forecast from Expert Analysts: DOGE On The Verge Of 1,000 Percent Increase!

NFTs Are Getting Important: So What Should Newbies Do?

Shiba Inu (SHIB) Price Analysis: What Is The Goal Of The Popular Cryptocurrency?

Ambitious Dogecoin Forecast from Expert Analysts: DOGE On The Verge Of 1,000 Percent Increase!

NFTs Are Getting Important: So What Should Newbies Do?

These Altcoins May Rise According To Popular Crypto Currency Trader!